Odessa’s Catacombs is really a Hidden Jewel in Ukraine. The 1,500-mile-long tangle of corridors and rooms under Odessa wraps under and over and in upon itself. Tunnels and rooms has the 1 square kilometers. If it were laid out in a straight line, the labyrinth would stretch five times longer than the world’s second largest catacombs, underneath Paris

No one knows how old Odessa’s network is, but the catacombs were greatly expanded in 1794, when Catherine the Great sought limestone to build her city by the sea. Odessa, from the moment of a birth, was under construction on a stone of a shell rock which was extracted from the underground. Therefore under the city underground labyrinths were formed. They store secrets of the past. The history of the Odessa catacombs is a terrible monastery of the criminal of Odessa and simultaneously they are Heroism Odessa the guerrilla of the period of occupation of Odessa during WWII.

The temperature in the Catacombs is +15C all-around the year. That is why we recommend you to take the warmer underwear.

Going in suburb of Odessa – village Nerubajskoe were you will visit catacombs. It is only one legal entrance to the Odessa’s Catacombs. We recommend enjoying this tour what will help you to open the underground history of Odessa. 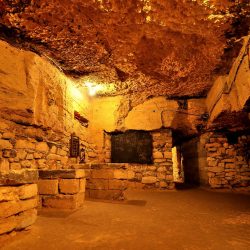 Do not miss this private guided tour!
Were picked up at the hotel at 12, and went a good bit outside the city. During the journey, the guide told (excellent English) about the emergence of the catacombs and its different uses (among others smuggling, traficcing, international academy for thiefs). When we arrived, we stepped into a world whose existence we could never imagine. To begin with, we tried to sow in limestone. That was not easy. Thereafter followed the tour that demonstrated the life of the Partisans during WWII. Again, the guide conveyed the story in an extremely outstanding way. The partisans lived here for 900 days. Separate “bedroom” for women and men, kitchen, bathroom, school for the children, health care department, workshop for weapons manufacturing, meeting room.
The tour ended with visiting a museum (70 steps up).
One of our most memorable experiences in Odessa. Highly recommended. 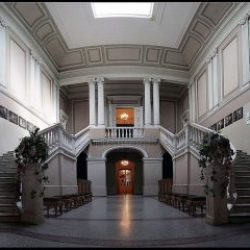 You have a good chance to touch

Walking tour of Odessa will know You
$100
FROM